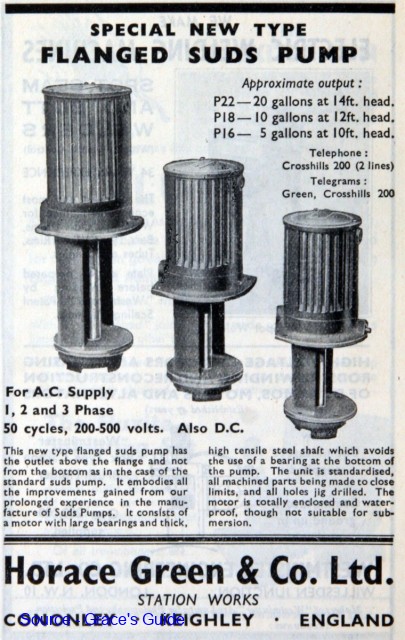 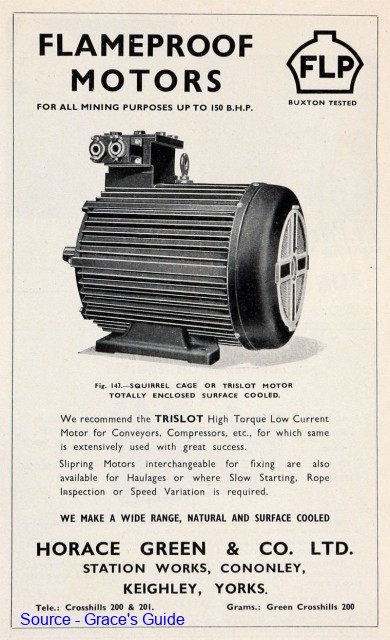 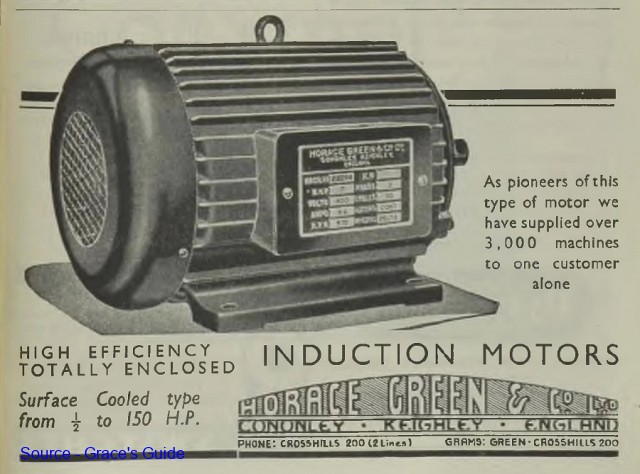 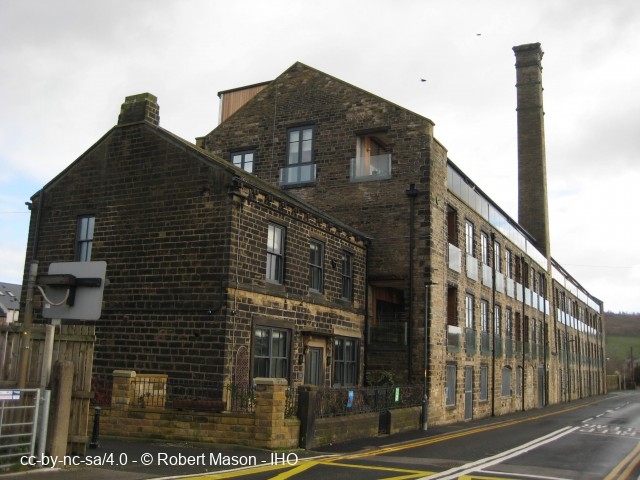 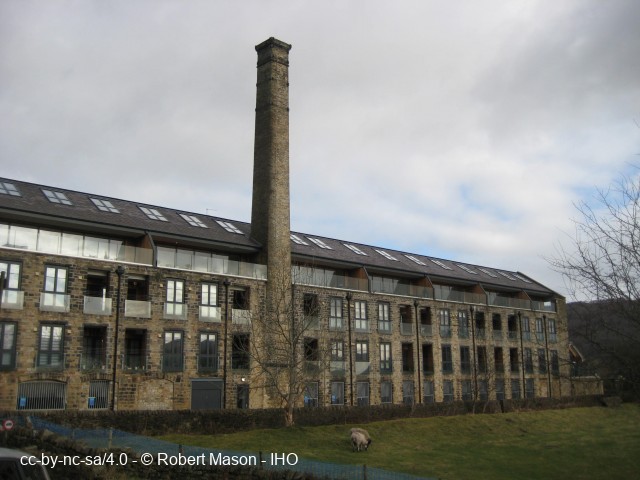 Description and History of Site:-
Horace Green & Company Ltd first manufactured direct current motors, these being supplied to local textile and engineering machinery manufacturers.The company also manufactured suds pumps for use in feeding coolant liquid and cutting oil to machine tools for which they already supplied the main motor.
Later the company pioneered the production of totally enclosed high efficiency three phase induction motors of between 1-300 BHP (0.75 - 224kW). The motors were used in many applications such as lift motors, flame-proof motors underground in coal mines and mine ventilation fans using 150BHP motors (112kW), connected in tandem for the northern coal fields. Along with motors Green's also made Dynamos, then later Alternators. They manufactured all of their own components, only buying in materials and machine screws.
Around 1912 they made motors for Frank Parkinson when at that time he mainly operated as a salesman (later becoming Crompton-Parkinson).
They supplied motors to many local companies such as George Hattersley & Sons, Prince Smith and Stells, Dean Smith and Grace, Keighley Lifts, John Lund (later Landis Lund then Fives Landis).
During the Second World War Horace Green's were entrusted with special wartime assignments which only became public knowledge in the 1970's due to the Official Secrets Act. This involved manufacturing and supplying High Frequency Motor Alternators for ASDIC (Anti Submarine Detection Investigation Committee) also known as SONAR (SOund Navigation and Ranging) used aboard Royal Navy warships to detect enemy submarines. ASDIC was the device that sent out an underwater high frequency detecting ping from the warship, then if a submarine was in range, an echo came back to the receiver, with the range and depth, so enabling an attack to be made on the submarine. So at a time when Britain was being cut off from supply ships from North America by enemy submarines in the Battle of the Atlantic, a company in a small village in the Pennines of the West Riding of Yorkshire, miles from the sea, made a huge and valuable contribution to the war effort.
Also in the same period they supplied motors for use on British Army mobile workshop lorries, which carried lathes, drills and grinding machines for battlefield equipment repair work.
Along with wartime work and supplying local industry in peacetime Green's showed their flexibility and ability to react to their customer needs. In the 1970's with the coal miners strike and three day working weeks with the associated power cuts, Green's developed a portable AC power generating set that could be driven from the Power Take-off Shaft (PTO) of a tractor for use on dairy farms where they still needed to refrigerate their milk tanks during a power cut.
Horace Green & Co Ltd occupied the half of the mill nearest the railway station, the other half by his father Peter Green manufacturing textiles.
The motor works consisted of the foundry for casting the casings etc. There was also a main assembly area measuring 80' x 250' (24.5m x 76.0m) where the castings were machined and the motor shafts turned and ground. Young women were employed in the lighter work of motor armature winding.
A test area was used to test the finished product with all the test currents and power output recorded in individual test records, a copy of which went to the customer. The site of Horace Green's Motor Works is part of a mill complex called Station Mills. There were originally two mills on the site, ten yards apart (9.1m), High Mill and Low mill which were built in 1837, High Mill being the one closest to the village centre. The original founder of High Mill, William Turner, when he died in 1838 left High Mill to his son John. John eventually bought the lease for Low Mill in 1852. Around this time a house was built in the grounds of the mill which in the C20th would become the offices of Horace Green's. Ownership of both mills passed to his son in 1862, also called John. When he died in 1886 he left both High and Low Mill to his son George. Around 1890 George built the present main mill building, incorporating the still evident High Mill but replacing Low Mill, now the mill was renamed Station Mills. The mill in 1905 had 250 looms and was producing Cashmere's.
The financial strain of rebuilding resulted in George becoming Bankrupt in 1901.
Peter Green, the father of Horace Green purchased Station Mills in 1905 from George Turner. Peter Green had been producing textiles at nearby Cross Lane Mill, Low Bradley (see NYK01646) since 1883.
The company continued to produce textile related products such as bed ticking and pocket cloths for spring interiors along with cotton shirting. Peter Green & Company operated at Station Mills until 1968.
Horace Green began an apprenticeship in electric motor manufacture in Bradford. He later worked for British Westinghouse (Metropolitan-Vickers) and the Lancashire Dynamo and Motor Company in Manchester.
He returned to Cononley and in 1910 established an electrical engineering works in the Western half of his fathers Station Mills, later becoming Horace Green & Company Ltd.
In 1960 for the Golden Jubilee of Horace Green & Co, 72 employees were flown to Dublin, which gives an approximate size of the workforce at that time.
Horace Green & Co Ltd ceased production in 1997.

Further Reading and References:-The History of Cononley, An Airedale Village. Hodgson Trevor, Gulliver David, Kiln Hill 2000. p105 p107 p110 pp112-116
http://maps.nls.uk/view/125638309
http://indicatorloops.com/hda.htm
With thanks to David Gulliver of Cononley Local History Association for his advice and use of his personal photos.
Thanks also to Brian Green, the Grandson of the founder and also former Works manager at Green's for sharing his knowledge regarding Horace Green & Co Ltd.

Help us improve this entry

The compilers welcome corrections or additional information on all sites.
Any information provided will be verified before appearing on the web site.

Material and Images on the IHO web site may be used for non-commercial purposes under the terms of the CC-BY-NC-SA-4.0 Licence Agreement.

Disclaimer
IHO seeks to maintain the highest standards and every effort has been made to correctly attribute the images and other material available on this web site.
If any individual or organisation believes that any image or other material is incorrectly credited please contact us and the image or other material will either be removed or the acknowledgement will be corrected.
Yorkshire Archaeological & Historical Society, other participating Societies and the compilers of Industrial History Online make no warranty whatsoever as to the accuracy or completeness of Industrial History Online.
The views expressed are those of the individual contributors and may not necessarily reflect the views of YAHS, the other participating Societies or other contributors.